ICF Organization Profile
The history of the Intelligent Community Forum (ICF) can be traced to 1985. The ICF was formed in the 90’s era of the 20th Century, is currently in its 26th year, and became an independent organization in 2004.

The ICF was established by the non-profit organization, Worldeleport Association (WTA). Headquartered in the United States, the WTA includes members from over 40 countries and regions such as Canada, the United States, France, the United Kingdom, Russia, Japan, Singapore, Belgium, etc. The ICF is a think-tank that researches 21st Century city economies and social development. The purposes of its research focus on economic systems based on broadband construction and, in order to strengthen international cooperation, it has created jobs and promoted economic development. Thus, the ICF especially emphasizes network ICT applications. Whether in industrialized nations or developing nations, the challenge facing cities is forging a prosperous, stable, and culturally rich society in a world more and more reliant on information and communication for work, investment, and knowledge. 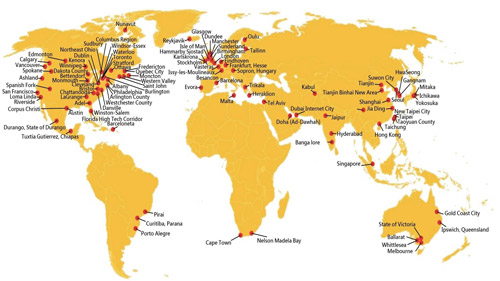